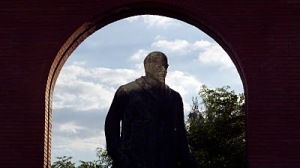 Born in Zambia in 1970, Carey Young grew up and studied in Manchester. She now works internationally utilising a variety of different media and settings. In particular though, her works critique contemporary culture and its prevailing systems. Memento Park is largely a retrospective, however the title comes from a new piece commissioned by the exhibition’s organising partners.

Gallery 2 is dominated by the large photographic prints that make up Body Techniques (2007) featuring Young, as she recreates scenes from a variety of well-known performance works by the likes of Bruce Nauman and VALIE EXPORT. The artist appears as a solitary figure amongst the vast construction sites of ever-expanding Dubai. The impermanence of such works sits uncomfortably with the flimsiness of such contemporary constructions rising rapidly out of the desert. However, whether Young is questioning is the landscape or merely using it as a canvas remains unclear.

Product Recall (2007) meanwhile, is a video of the artist laying on what resembles a psychiatrist’s couch, and as an analyst figure reads out a series of advertising slogans, she attempts to recall which corporation they relate to. The work forces you to consider how much advertising permeates our consciousness, however the effect is dimmed slightly by the fact that Young can’t seem to recall that many. Another interesting piece, Inventory (2007), sees Young collaborating with two scientists to work out the levels of all the elements in her body and subsequently their current market value, giving the artist a “price”. A clear take on the market value of art, artists and the individual.

In Gallery 3, several works deal with a world obsessed with legality, contracts and claims. A stand out is Terms and Conditions (2004) where a suited figure reads out a long legal disclaimer to those who wish to enter an idyllic beauty spot behind her, the text apparently culled from a range of corporate websites.

The title piece, Memento Park (2010), a film projected on a wall-sized screen is the most visually striking and subtly engaging work in the exhibition. The piece was filmed in Budapest’s eponymous Memento Park, where Soviet-era statues from across Hungary were deposited after the fall of the Berlin Wall. Shot in the intense light of dusk, it is startling to watch this slow, meandering film survey these huge, aggressive monuments to social realism reduced to gathered curiosities in a tatty park on the edge of town. Traffic and birdsong fight to become the soundtrack as Carey shows disembodied sections of the sculptures, a beard here, a fist there, looking as oddly out of context as the statues themselves.

As a whole, Young’s work seems to point towards the political, but her intent remains obscure and ambiguous. Many issues are raised through the different mediums, but frustratingly nothing is really said about any of them. Perhaps that’s the intention, the artist appears to be engaged in a passive resistance with the corporate world, but that passivity leaves many of the works feeling as cold and ambiguous as the actions of the corporations she questions.