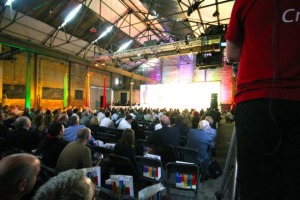 When the arts funding cuts were finally announced last year, there was trepidation in Liverpool as in the rest of the country: what would close? What would be cut back to the bone? There were inevitable causalities, and Liverpool lost the A Foundation, a huge complex of former industrial buildings which had opened in 2006 as an independent contemporary art space.

Yet, it was not the end for the site. Three creative businesses already located in the vicinity; architects Union North, design agency Smiling Wolf and the Elevator Studios complex, got together with building owner, arts’ patron James Moores, to develop a new broader and more sustainable model for the venue. From this, Camp and Furnace was born.

Venue Manager Ian Richards describes Camp and Furnace as a “constantly evolving, independent, cultural destination”. Since it’s reopening a few months ago, it has hosted several club nights, the Liverpool Food and Drink Awards and even Google’s first ‘engagement day’ in the UK. On 16th December, the venue will host a ‘Winter Picnic’ promising ‘fake snow, real food and open fires’.

The ‘business’ end will develop next year, with the opening of a bar and eatery, alongside a hotel with a difference: “Camphotel will be part boutique hotel, part indoor festival campsite,” says Ian. “We will be taking a selection of vintage caravans and re-appropriating them in an ‘outdoors indoor’ setting.”

Though Ian insists the cultural offer is still at the core of Camp and Furnace: “We’ll be rolling out a varied cultural programme over the coming year. Events to watch out for include art installations, exhibitions and performances; collaborative theatre, avant-garde cabaret, comedy and music.”

Based in the Baltic Triangle, which local authorities are pushing as the next ‘cultural quarter’ in Liverpool, the plan is to have the venue more deeply connected to the city’s creative grassroots, rather than operating in isolation as an arts centre. Ian explains: “We’re fortunate to be neighbours with Liverpool Biennial and similarly Elevator studios which is home to numerous creative firms. We’ll be looking to strengthen our engagement with these and others in the city over the coming months, providing them with a place where they can meet, exchange ideas and socialise.”

With the pretty much consistent shortage of funding for the arts in Liverpool, there’s always been a tradition of DIY culture, which has led in more recent years to a more entrepreneurial spirit in the arts. Another example is Mercy, a creative collective which came to prominence during the build up to Liverpool’s Capital of Culture year and has gone on to do commercial design work for everyone from Diesel to Arctic Monkeys. Throughout though, they have also organised their own boundary-pushing arts programme, most recently a series of events in collaboration with the Abandon Normal Devices festival.

Doug Kerr one of Mercy’s Directors, explains the relationship between Mercy’s ‘arts’ side and its ‘agency’ side: “The two sides operate independently of each other, but with the same set of values and principles. Our job descriptions straddle both sides of the business, and each side feeds the other creatively.”

And Doug feels having two sides to the operation does not lead to compromises: “Far from it, we’ve found a way of working that suits all of our skills and personalities and the result is that we’ve got two self-sufficient models. It’s not necessarily right for everyone, but for us we’ve been able to have our cake and eat it – at a time when it’s not easy to sustain an arts organisation. Our general policy is to unify disciplines and encourage collaboration and we feel like it’s that kind of approach which will stand us in good stead in the future.”

Whether we like it or not, the arts are changing from a model dominated by public-funding to something more fluid, and those organisations that are flexible and self-sustaining are the ones that will likely survive and thrive in this changed climate.

This piece appeared in the November 27th 2011 edition of The Big Issue in the North.