Foreign travel was once something largely reserved for the well off. Improvements in transportation and communications in the latter half of the 20th century though, saw the opening up of international tourism for the masses. In tandem with this came the growth of the self-proclaimed ‘traveller’. Those who distinguished themselves from tourists by aiming to go variously; off the beaten track, to the edgier spot, in search of ‘authentic’ culture, while avoiding the popular or things that smacked of package style organisation.

Being such a traveller in the late 20th century usually required having surplus money and, perhaps even more so, surplus time. However, with those ever-advancing improvements in transport and communications and other factors such as borders being relaxed and increasing global economic development, the goals of the traveller became more accessible. Thus, with the world continuing to get ever smaller, ever faster, those who place personal satisfaction in self-consciously being travellers find themselves having ever less options. At the same time as this and deeply linked, we have seen growing critiques of tourism in parts of the press that, ironically, did very well for years from advertising selling foreign dreams to its readers.

Of course, this isn’t entirely new. In the 1970s, travel writer Paul Theroux talked of the typical curmudgeonly snobbery about travel, finding it going back to at least Evelyn Waugh’s When The Going Was Good of 1946 and even further to William T. Brigham writing in 1886: “Old travellers know how soon the individuality of a country is lost when once the tide of foreign travel is turned through its towns and by-ways.” Nothing new under the sun.

Even if going solo, off beaten tracks or engaging positively with locals, by definition you, I, are still tourists. There is of course deeply damaging tourism; landscapes destroyed by over development or over visitation, hooliganism, exploitation, local residents driven out. However to blame all tourists for this or to try and entirely distance yourself from all the issues tourism can create when you go on foreign trips by defining yourself as a traveller and ‘them’ tourists, is, frankly, silly. It’s also laced with class prejudice which can be seen in some of the articles emerging about ‘over tourism’. 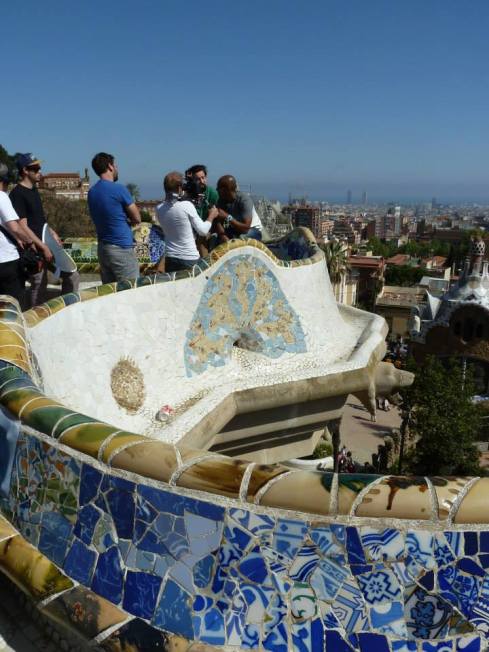 Talk about the growing cruise industry is an example of this. Seen as a big symbol of over tourism, ships are inevitably described as ‘huge’, ‘monsters’ with their ‘tides’ of passengers, and usually more subtle references to the undesirable class status and habits of those passengers. There are some genuine environmental issues about large ships in certain, specific water bodies and big engines pumping out fumes close to urban centres. Nevertheless, I remain unconvinced that one large cruise ship with thousands of passengers is any more environmentally damaging overall than a dozen medium sized jetliners moving the same number of people to an airport in a suburb, out of sight, out of mind. With those passengers then needing various often individualistic forms of transport to get to the place they actually want to be. Not to mention the impact of the half dozen hotels they then occupy. But as cruising is generally more of a working class and lower middle class dream, it’s easier to single it out for blame than acknowledging the role that anyone who goes on holiday abroad plays in the damage that tourism can indeed cause.

Amsterdam is one key European city struggling with tourist numbers. Dutch writer Joost de Vries noted in his article in The Guardian his angst at it becoming “like Venice”, as he describes, shorthand for a city so flooded by tourists that it no longer feels like a city at all. Yet he is also self-aware enough to admit that, he too becomes someone else’s tourist problem when he leaves Amsterdam: “Someone in the south of France will be writing the exact same article I’m writing now (bonjour!). That’s the whole point of complaining about tourism. Are you staying home this summer? If not, you are someone else’s tourist.” Indeed, how many writers in major metropolitan centres even as they complain of the damage done to their city by visitors, are soon booking their next flight elsewhere? Most people want to go on holiday and for the majority, going somewhere abroad is the ambition. As the world has got generally richer, tourism has become the world’s biggest industry. I remain an optimist that this demonstrates our common interest in each other and the world. Which in the present political climate, now more than ever is a good thing. To quote Mark Twain: “Travel is fatal to prejudice, bigotry, and narrow-mindedness, and many of our people need it sorely on these accounts.”

Some of the angst around tourism is about how it changes a place, becoming less ‘authentic’. It is true a certain kind of hipster aesthetic has proliferated in urban areas, washing outwards from London, New York and Berlin with diminishing returns. That however ignores that cultural exchange has always prompted change, especially in urban areas and that as the world got smaller, this was always going to speed up. Cities have always copied popular things from each other – witness the glaring similarity of most Victorian town halls and museums across the UK, long before people started shouting about clone towns. Not to mention that seeking ‘the authentic’ while deeply human, is also in itself, pretty inauthentic. A chimera given that, like in physics, as soon as you observe something, you change it.

The reason many people who live in areas popular with tourists work in the industry, especially in developing countries, is that it frequently has better pay and security than the traditional jobs that were available to them. Travellers may bemoan somewhere they once saw as authentic see its people move from say, farming, to running a hotel, but then I doubt many travellers ever had to experience the precarious life of being a sustenance farmer. Tourism also offers opportunities for areas with few other options for a sustainable economy. Venice may now indeed be over visited and needs to manage that, but its traditional economic powers (for all its beauty, much to do with slavery and exploitation) have long been in decline, with the city largely relying on tourism now for well over 100 years. After the last of its port and shipbuilding moved away in the 1950s as it became impractical to use its quaysides, without tourism, the city, with its huge maintenance costs, would have struggled to sustain itself at all. With its own population in decline well before the age of mass cruising.

City breaks to the likes of Venice, Amsterdam or wherever, were once the solid preserve of the middle to upper class. However, with the emergence of low cost airlines, the expansion of hostels, the Internet in general, an industry of alternative travel guides that rose out of the grassroots Rough Guides and Lonely Planet (now both part of global corporations) not to mention the general opening up of Europe through the EU, such city breaks become common place. Thus, the traveller now sees them as problematic, now that everyone visits cities rather than just ‘people like them’.

The potential negative effects of increasing tourism on existing urban residents are true, from stag do drunkenness to people being priced out of apartments for Airbnbs. But the traveller critiquing this is a hypocrite. All the disruptive businesses and technologies that made such travel increasingly possible and affordable to more people, were originally popularised by such travellers from the tech-savvy middle class. Airbnb was once talked about as a radical alternative to corporate hotel chains and a way to engage with local people and culture. So much so that it proliferated. Now the same people who helped it catch on judge others for using it. Of course, there’s a long history of the middle and upper class making something popular then judging others for adopting them, from microwave meals to out of town supermarkets.

That’s the thing with capitalism in general, however punk and radical you convince yourself something is, if it works, it becomes mainstream, see everything from Starbucks to Uber. As ever with such problems, the solutions are to use the power of democratic structures to reign them in. Not bemoan and blame that more people can travel than ever, but take hold of these changing patterns and technology. Tourist taxes, to make sure visitors contribute to local services; regulating the likes of Airbnb to stop it destroying residential areas; limiting visitor numbers to fragile sites; imposing taxes and environmental controls on transportation providers; ensuring local small businesses gain from tourism not just big chains, are all ways that we can reduce some of tourism’s negative impacts.

That more people want to see more of the world is a good thing. Don’t blame the desire, but those who exploit that desire with no thought for what they’re doing to these places or the planet. And even if you see yourself as a traveller, however you behave, accept that, in the end, you’re still just another bloody tourist.

An abridged version of this piece was published by New Statesman CityMetric in January 2019.