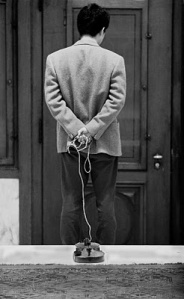 As we move into the second decade of the 21st century, it appears as if “media art” is finally being accepted as a high art form. It has been nearly 60 years since Nam June Paik’s first experiments with sound, television and video emerged into the international art consciousness, and so reaching a point of major institutional recognition highlights just how far ahead of his time he really was.

Perhaps more profoundly, this first major retrospective since his death in 2006 signifies how so many of his ideas predicted our present day multimedia world, which is saturated with technology, information and interactivity.

Paik began his creative work with music. The first section at Tate examines, how his relationship with the radical composer John Cage informed all his later work and how, despite not considering himself a “visual artist”, he began to move into new mediums saying: “I knew there was something to be done in television and no one else was doing it.” Despite this, in his later work, he retained many of the concepts he learned whilst composing avant-garde music; chance, interaction and pushing the limits of technology.

From his earliest works Paik wanted to break down the boundary between artwork, artist, and viewer and viewed. The great hulk of Video Synthesiser 1969 (1992), developed by Paik and engineer, Shuya Abe, to allow participants to manipulate images on a screen without specialist technical knowledge, is startling. A lump of knobs, dials, leads and CRT monitors, it allowed, the general public (perhaps for the first time) to do what previously only broadcast engineers could do and what today any kid with a basic computer and internet connection could do.

As with so much retrospective documentation of performance and experimental work, the old televisions and tape machines detailing early works can only hint at the experience of witnessing or using them at the time. It’s hard to imagine when these common devices were cutting edge pieces of technology that were being used in a radical way, particularly now, because analogue TV sets and tape machines look like nothing more than junk-shop relics.

The best of Paik’s work though, transcends this. TV Garden 1974-77 (2010) one of his first large-scale installations, a series of televisions placed among a myriad of tropical plants each showing a mesmerising television mash-up Global Groove (1973) that could be a proto-YouTube video. Its continual, rhythmic flickering colours and sounds are beautiful, illuminating the foliage in the darkened room, and a prominent example of how Paik wanted to break down the barriers between the natural and technological.

Underpinning this were Paik’s Zen Buddhist beliefs. Often highlighted as his signature motif, his collection of “TV Buddhas” epitomises much of his art and philosophy. The ancient Buddhist symbol, in a variety of guises, sits watching a TV screen, displaying clearly, the interaction between humanity and technology and the contrasts he so loved; the Eastern and the Western, the old and new, the technological and the spiritual.

The contextual information in the gallery further highlights Paik’s desire for global human connectedness through technology. He is credited with coining the term “Information Superhighway” back in the 1970s. His foresight is also highlighted in 1994’s Internet Dream, a video wall displaying a constant stream of rapidly changing garishly coloured scenes to hypnotic effect shows his early awareness of our move towards information saturation and his celebration of its constant expansion with every shift forward in technology.

At FACT meanwhile, the cavernous Gallery 1 is entirely taken up by the spectacular installation Laser Cone 1998 (2001). A tent-like structure you lie beneath and experience an overwhelming, intense laser show. Like Internet Dream, it seems to reflect Paik’s interest in subjecting the viewer to the beauty inherent in visual overload.

Gallery 2, by contrast, is set out like a chic lounge where, armed with remote control, you’re invited to flick through hours of Paik’s video works. Some of Paik’s riffs on the potential of the medium and his love for pushing it to its limits look retro, in some cases, just boring, compared to today’s potential for intervention and experiment with media. However, their influence, on everything from MTV to Skype and today’s video artists, is clear and profound.

This retrospective is comprehensive, but not overwhelming, and, even spread across two venues, it’s easy to navigate through the artist’s life and career. This enables visitors to clearly see how his work morphed and changed with the times and advances in technology.

Paik was a pioneer of “media art”, yet it seems he always wanted what we have today. Not only did he realise the potential for technology to be used in art, but its potential to allow the viewer to take a more active role, for mediums to merge, and for anyone to make or manipulate the content. Paik understood that technological art needed to move beyond the medium, and like all great art, to be about humanity and its relationship to the world.