Liverpool’s Open Eye Gallery reflects on its pioneering history as it prepares its move to a new home. 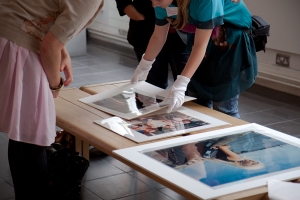 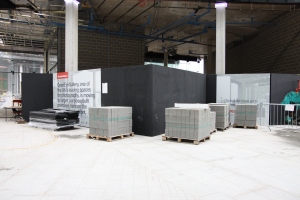 Liverpool, with its mixture of grand buildings and dockland dereliction, strong characters and deep poverty, has often been a favourite subject of photographers from around the word. Everyone from Cartier-Bresson to Candida Höfer and Rineke Dijkstra has shot in the city. Aside from being a subject though, Liverpool has also been home for over 30 years to one of the most important galleries in British photography, Open Eye. This autumn it will move to its first purpose-built home, a striking building on the city’s waterfront, thus beginning another chapter in its chequered history.

Director Patrick Henry is leaving the Wood Street space which has been Open Eye’s home since 1995. The gallery’s now filled with boxes, books and files in preparation for the move. After seven years at the helm, Henry has overseen the long process of finding the organisation a new home, not easy in the midst of a recession. Having studied history of art at Manchester University, Patrick worked for several years as a freelance photographer and then a Curator at what is now Bradford’s National Media Museum, before becoming Director at Open Eye. He says: ‘Cities like Liverpool have always had a romance and fascination for me. So when I was working in Bradford and looking for something new, more freedom and autonomy that you can have working in a big institution, when the job here came up, I was very interested in it.’

Open Eye originally emerged in 1973 as part of an organisation called the Merseyside Visual Communications Unit (MVCU). In its early days, MVCU was a heady mix of art and activism, a DIY operation run on a shoestring by artists, volunteers and a tiny staff team. Patrick says of those days: ‘It had a mission to do with media education, activism, and community arts, making facilities and equipment available at affordable rates. Making it possible to produce culture in a democratic way and also to present the kind of culture that at the time you couldn’t necessarily find in the official venues.’

But, as Patrick details, keeping such an operation afloat in those times was an unenviable challenge: ‘Some of the stories of the storms that were weathered through that period are almost biblical. They had really severe floods and there was a series of fires. There were even firebomb attacks by a far right-wing, racist organisation.’

In 1976, MVCU moved into an abandoned pub, the Grapes Hotel in Whitechapel, central Liverpool. The Open Eye Gallery itself followed in 1977, occupying what had been the public bar. It was one of the pioneering galleries in that period, fuelled by a growing sense of photography’s artistic, social and political potential. ‘It was part of a network that was growing through the ’70s and the ’80s of independent photography gallery spaces around the UK,’ says Patrick. ‘Showing photographers like John Davies, Paul Graham, Tom Wood and Martin Parr, who were increasingly confident and assertive about the voice they wanted to have as artists, though they were for the most part excluded from the gallery scene and museum collections in this country.’

During this time, Open Eye’s exhibitions had a strong role in promoting some of the photographers now regarded as Britain’s finest, as Patrick details: ‘A really important one was The Last Resort. That exhibition was produced by Open Eye and toured. That was actually a joint exhibition of work by Tom Wood and Martin Parr. It’s very well-known now because of Martin’s work, and his book, but the original exhibition was the two of them. “The Last Resort” was of course New Brighton, across the river from Liverpool.’

Later, the gallery moved to Bold Street and shared premises with several other community-focused arts groups until funding and organisational problems saw Open Eye separate. In November 1996, the gallery was re-launched in Wood Street and began to show a stronger element of moving image work, as well as adopting an increasingly international photography programme.

Fueled by a desire to expand its exhibition spaces and increase and diversify its visitors, in mid-2009 Open Eye entered the main phase of its relocation project, which will culminate in its new, purpose-built space opening in autumn 2011. The main gallery on the ground floor will showcase an international programme of contemporary photography. A mezzanine gallery will display exhibitions drawn from Open Eye’s archive of over 1600 photographs, while gallery’s exterior wall will be also be used for a series of large-scale vinyl commissions called, ‘Wall Work’.

The ability to show images from Open Eye’s extensive archive regularly for the first time is one of the key developments of the move. ‘The archive dates to 1980,’ says Patrick, ‘and it’s been growing ever since. There are the big formations; social documentary, portraiture and urban landscape and so on, but there are also countless, odd, fringe things as well. From a programming point of view for the archive, we just want to explore that over time and set it up in dialogue to the contemporary work we are showing.’

Open Eye’s launch programme in the new gallery reflects well both its past and present. Its main exhibition will be Mitch Epstein’s first solo show in the UK, American Power, which examines how energy is produced and used in the American landscape, questioning the power of nature, government and corporations. The archive show meanwhile will be Chris Steele-Perkins The Pleasure Principle, a photographic portrait of England in the 1980’s.

Patrick is keen on the contrasts and similarities between the two exhibitions: ‘Steel-Perkins project is about the 1980’s in Britain. It’s more photojournalistic, social commentary; whereas Mitch’s project is more art documentary. So that pairing was about a resonance, but also about a series of contrasts. Mitch’s work is kind of contemporary photography on a grand scale, while Chris’ is shot on 35mm. For our first show to connect to the culture and politics of the 80’s seemed like a good thing for Open Eye as well as it points back to our own history.’

Open Eye has changed with the times, as photography itself has changed, becoming more accepted as a fine art medium, whilst also contemporary arts spaces have become a more accepted part of the landscape of English cities. It is good to see a gallery so focused on the photographic move to a grand new space in prominent location. But is Open Eye in danger of losing its edge in its new, tourist-friendly home? ‘Historically, there has been a real edge to what Open Eye has exhibited, and we really want to retain that,’ says Patrick. ‘So we want to be popular and widen our audiences, but the key challenge, and something that’s not negotiable about what we do, is to be both popular and also be critical and provocative. Which is something that I think resonates well with Liverpool as a city.’

The new gallery opens to the public on 5th November 2011.

This piece appeared in the September 2011 edition of f22 magazine.

My Tweets
Follow Kenn Taylor on WordPress.com
Join 755 other subscribers