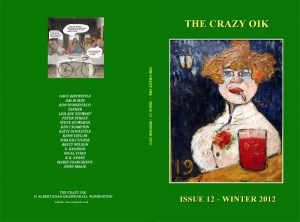 Hear no evil. See no evil. Speak no evil. All three sat in the front of the Transit, faces locked in grimace.

The van’s old heater could not mask the cold of winter. They wore their high-collared, all-weather coats up past their chins and their breath turned into long streams of white mist with every exhalation.

Aaron drove the van around at a steady pace, focused intensely on the road and his labours with the knackered gearbox.

Phil and Ethan sat adjacent on the dual passenger seat. Casting narrow eyes through the murky windscreen for targets and occasionally rubbing their hands for warmth.

Aaron and Phil were the old hands at this game, Ethan the apprentice. They had been working since first light. Out to catch anything good left overnight.

As time passed, dialogue was reduced to a few comments about the cold and remarks on the sight of any prospects. Coughs, squeaky farts and the crunching of the gears were the only other sounds that echoed around the metal box of the van.

The miserable day had reduced even the glow of a successful prize to minimum. It was now midday and they had two bikes in the back already: a fairly decent Scott and a good-but-old racer. More was needed though.

Coming back around the north end of town, they drove down between the Royal and the university and turned into Paddington.

Hoards of students filled the squares that formed the centre of the university. Aaron slowly moved the van over towards the large bike rack by the university branch of the bank.

“They’re jus goin in for their afternoon lectures,” said Aaron, “we’ll wait till it’s all quietend down a bit.”

“Fuckin gormless studes eh?” said Ethan looking towards the others. They stared ahead unmoved.

They parked the van a little distance away from the racks. Even when most of the students had disappeared into the various university buildings, they continued to wait as the engine ticked over and a Radio City DJ chirped away low in the background.

Eventually, as the student body trickled down to a few stragglers, Aaron nodded and Phil got out of the van and walked casually over towards the bike rack.

Adjacent to the rack, there was a CCTV camera high on a pole. Phil pulled his high plastic coat collar a little further up his face. No one would be watching he reckoned, they never were. But, even if they were recording, on the shit grainy video he would now be just another shaven head in a big coat.

In the rack there were four bikes. Phil assessed the scene within a few seconds, glanced around to see if anyone was watching, and then walked back towards the van. He raised his eyebrows a little and smiled at the other two as he approached.

He climbed back in the van and, still looking forwards through the windscreen, said, “There’s a quality Specialized, but it’s got a decent D-Lock on it an, at this time a day, I jus don’t think it’s worth riskin it. We’ll have the saddle off it though; that’s jus bolted on. There’s also a half-decent Dawes racer and a class Kona. We’ll ave both a them. And a piece of shit Raleigh, but I can’t even be arsed carryin it.”

“We aint got anything yet mate,” said Aaron, and he looked Ethan in the eye for the first time in ages. “You hold yer fuckin horses.”

“Let’s jus get it over and done with,” said Phil, and he pushed the van door open again. As it separated from its bent frame it made a popping sound.

Aaron also got out of his side and walked around to the back of the van. He and Phil pulled the back doors open and picked up a set of bolt cutters off the floor.

Leaving the back doors a little ajar, they walked quickly over to the bike rack.

Without speaking, Phil went over to the first bike and snipped its loose chain in an instant, then set to work on the next one. Aaron pulled the first bike free from its holder, lifted it up and rolled it rapidly towards the back of the van.

Ethan, meanwhile, having unscrewed the bolts on the expensive saddle, began to pull it out of the frame.

They all glanced around constantly, but worked in silence.

Ethan pulled the saddle free with a grunt and fell backwards a little with the force of the release. He walked around to place it in the back of the van.

Phil hacked through the last of the chain on the second bike, it had been harder than he had imagined. Grabbing at the crossbar, he prepared to yank it upwards when he heard an intense rushing at the side of his ears.

He was hit in the side of the head with so much force that his whole body swung violently sideways. He heard a cry and ‘Fuck, Phil.’ before his vision turned red then black.

His sight returned within a few seconds and he found himself rolling uncontrollably on the ground. Reflex and long experience made him jump up immediately, but before he could fully regain his feet he was hit in face again, this time he could identify by a foot, and slid sideways into a brick wall, tasting iron in his mouth.

A second kick to the chest knocked the wind out of him and he curled up to protect himself from further blows. But instead he heard a yelp of pain from above and then felt a dead weight slump onto of him.

As Phil struggled to cough out the blood and the chunks of teeth and gum that filled his mouth, he felt his arms get grabbed and his whole body being dragged violently forward. Still dazed, he figured more pain was about to come his way. He braced himself but, even though his arms were being strained in their sockets, he realised he was being lifted up.

As his vision recovered, he could see that it was Ethan that was pulling him forward, holding him by the shoulder and arm. Phil didn’t even have the time to set his legs straight and his feet dragged and kicked as he tried to find balance.

Ethan continued to pull him along aggressively. He stared straight ahead to the road where Phil could see Aaron rapidly turning the van around with the gears grinding loudly again.

Aaron pulled up with the open back doors facing the two of them. Ethan pushed Phil forward straight onto the greasy metal floor and leapt in behind him. Phil looked back and caught a glimpse of a crumpled body slumped by the bike rack as the van moved away. And the bolt cutters covered in dark blood held by Ethan as he pulled shut the doors.

This piece appeared in Issue 12 of The Crazy Oik in January 2012.