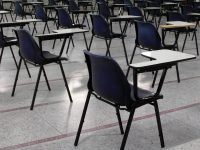 Yet at age 11 me and many of my friends were declared to be ‘unacademic’ by the education system.

The Metropolitan Borough of Wirral in the Liverpool City Region is one of a handful of local authority areas that always retained a grammar/secondary modern system and I went through it in the 1990s. Wirral is an area of extremes, containing some of the wealthiest and poorest areas in the UK just a few short miles from each other. Now, have a guess which parts of the borough the grammar schools are concentrated?

My parents took an active interest in my schooling and asked me if I wanted a tutor to help me with the 11 plus. As a quite shy, awkward child, I expressed disinterest. I didn’t want to draw attention to myself. No one in my family had any real experience of anyone engaging in higher education. We’d mostly worked for the railway, so surely, I should do the same? The area we lived in was pretty solidly working class. Some parents did get tutors for their children as the 11 plus approached, many others though couldn’t have afforded it even if they wanted to.

Inequality isn’t always obvious when you’re a child, especially when you live somewhere that most people are in the same boat. I didn’t really know then that I lived in one of the poorest areas of the UK or understand that when we were taken by our primary school to see a submarine being launched at the local Cammell Laird shipyard, that as we waved the boat off, we were waving away the economy of our town, as it closed soon afterwards.

I could tell though that something was deeply unfair when our local swimming baths had to close due to cutbacks and a grammar school in a rich part of the borough ‘let’ our primary school use their own private swimming pool for lessons. How could an area of estates housing thousands and thousands of people and containing numerous schools lose its swimming pool, when a grammar school up the road bankrolled by the taxpayer up have one just to itself?

I have a vague memory of sitting the 11 plus. Later as an adult it was discovered that I am dyslexic, making the very narrow measure of ability that is this exam even harder. I failed like many others and we were divided up into sheep and goats. I went to a secondary modern in a slightly better off area to where I grew up. That’s right, what cheerleaders for grammar schools often forget to tell parents is that a return to a grammar system is also a return to a secondary modern system. Sure, they’ll be given a bullshit trendy updated name for this new era, but let’s translate it: the underfunded schools for the poor kids.

Paint flaked, windows were rotten, the heating didn’t work in parts, textbooks were shared as was computer equipment. Don’t get me wrong, it wasn’t cartoonishly Dickensian, just a bit crap, and after Labour got in, facilities and resources improved. Up the road though was the grand shining grammar and the feeling you just mattered less than those children was pervasive. Despite all this there were many children with talent, wit and intelligence in my school who were let down by the system.

Some teachers would tell me I was pretty sharp, but that I needed to work harder at things like spelling andgrammar (my dyslexia still not discovered) and that maybe I should go to university. I wondered though, what was the point? I was only good at things like English and History and I struggled with the writing even with them. And what jobs could you do with something like that? I knew I wanted to do something creative, but that was thin on the curriculum. University was loosely encouraged by the school, but Labour had just brought in tuition fees. I didn’t really understand it all, but by this point as a young teenager I was living off my father’s sickness benefit after he was thrown on the scrapheap after decades of working the railway, so anything involving debt was frightening and discouraging.

After school, I drifted into low-skilled manufacturing work and retail. Long, dull and hard work. Close to despair I started reading some books by local authors out of boredom. From a similar background to me, they had gone to university and done creative jobs. If they could do it, maybe could I do as well?

I was lucky in many respects. Wirral was one of the first places to get the now axed Education Maintenance Allowance which helped me. I was supported by the now decimated Connexions service into completing my UCAS application. A former teacher wrote a reference for me. In today’s merry-go-round schools, they’d probably already have moved on. My university fees were waived due to my parent’s poverty. I even got one of the short-lived maintenance grants for poor kids to top up my loan. I went to university and achieved a few things. God knows what I would have done without all the things that helped me get there. Now all long gone, taken by a government that says it believes in social mobility.

Years later I got a job in a big grand old cultural institution. One that my parents would take me to as a child and mention the important work the clever people did there. Walking up the huge steps on my first day at work I was intimidated, surely the clever people would find me out? Remember boy, you’re worth less. You don’t get to work in a grand building. It’s not for you. Clever people pass their exams….

Being labelled as inadequate at a young age stays with you. With the wisdom of confidence and age of course, I know this to be bollocks. There are geniuses on building sites and idiots teaching in universities as anyone with any sense knows. To put it more eloquently than I could as a child wondering about the injustice of that swimming pool, the difference is nearly always money and privilege, not intelligence or ability.

The other tragedy though, is it’s not just about the children who are cut off from the monied schools by a single poxy exam. Some might say my parents should have pushed me harder, but no, they did the right thing. Supported me to find my way. Despite the desperate earnestness, game playing and spending of parents who understandably want their children to do well, plenty of the kids who ‘get in’ because of parental obsession often don’t have any particular academic ability and don’t always do well once at university. This is when many young people step off the treadmill of one hoop jump exam after another and, without a parent shoving them, realise they don’t really want to be there and drop out or drift aimlessly. I’ve known just as many people who hated their grammar school they felt they didn’t really fit into or felt crushed by parental expectations they could never fulfil as who ‘did well’ from being in them. Ever more the traditionally academic, usually single sex and often monocultural grammars bear little resemblance to the outside world of work. Too many parents still haven’t yet grasped that Royal Insurance, ICI and Abbey National don’t have thousands of easy opportunities for graduates to be picked up from a ‘good’ university every year.

Yet we have this crass nostalgia from people who confuse the opportunities they were gifted having grown up in the biggest period of wealth redistribution in UK history with having been down to going to a grammar school. Given most of my family have been tradespeople, I deplore the state of technical and craft education in this country. A product of decades of indifference. Yet you rarely see the children of the politicians and journalists who say a grammar system is ‘best for all’ down the local college learning how to repair motorcycles do you? Funny that.

These cretins are threatening the future of the UK’s children not just because of their nostalgia, but beneath that, a clear, ruthless ideological mission to build new bastions of privilege for their offspring while they let everything outside rot. Don’t believe for moment in the lip service paid to ‘places reserved for poor kids’. Just like all the promises about no university fees for deprived young people, as soon as they get the legislation over the line, they’ll all quietly be axed.

No school system is perfectly fair, but some are fairer than others. The universally discredited grammar system has no place in modern Britain. Far from new ones opening, the remaining ones should be cracked open.

If there’s a reason I went through a system pretty much designed to ensure my voice was not heard in the corridors of power, it was to be able to say this: a country which does this to its children in its education system, is a country that’s more concerned with maintaining the stinking illusion of privileged superiority than with its children’s futures. And what the hell kind of country is that?

This article was published by Comprehenisve Future in May 2017.