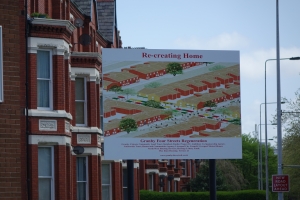 The Granby area of Liverpool recently became the centre of a brief flurry of international media interest when a project based there was nominated for the Turner Prize.

Assemble, a collective of eighteen London-based artists and architects, all aged under 30, have been working with the Granby Four Streets Community Land Trust (CLT) on the re-development of ten terraced houses left derelict after the machinations of the Housing Market Renewal Initiative (HMRI) of the 2000s. Once refurbished, the land will remain held in trust to deliver permanently affordable housing.

But the CLT’s work with Assemble is only the latest stage in a spirited and creative campaign to save these homes – one that began many years ago.

“It’s been quite a messy process,” says Lewis Jones, one of Assemble’s members. “Lots of people have been involved, going back 20 years, and we’re just a small part of that. So when suddenly there has been this huge wave of interest when the Turner Prize nomination was announced, we were quite keen to divert more of that attention to the Community Land Trust, to give a more balanced view of the situation. I still think that’s really important.”

The Housing Market Renewal Initiative was a Labour scheme, started in 2002, which was intended to renew “failing housing markets” in economically struggling parts of England. When the Coalition government axed HMRI in 2011, it created a vacuum that left vast areas of housing in limbo.

But this also turned out to be an opportunity for the Four Streets campaigners. “As time had moved on,” says Ronnie Hughes, a housing activist and CLT member, “things had got tighter in the housing market. So the ideas we’d been having, of splitting the streets into smaller groupings and having different kinds of tenure and different kinds organisations working there – well, they turned out to be the only ideas left.” 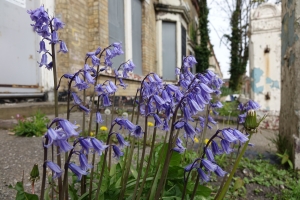 After beginning their own plans to regenerate these ten houses, the CLT decided it was time to work with some professional architects. “Assemble worked to turn all of the people’s ideas into sketch plans and real plans,” explains Hughes. “They helped to make the community and the Community Land Trust look like a real thing. As time went on, though, obviously they had to stop being volunteers and compete to be the architects for the CLT, which they now are.”

Hughes is keen to stress the CLT and Assemble are not regenerating Liverpool 8 alone, however. A complex web of organisations, alliances and initiatives is working to re-develop empty houses in the area, and the campaigners are keen to move on the from the “heroes and villains” narrative that’s dominated some of the press coverage.

“We couldn’t do any of this without the city’s support,” he says. “They gave us the houses, for free. The council also completely changed their policy in order to allow this to happen.”

The group is happy to work with specialist housing providers, too, he adds: 47 houses being worked on by Liverpool Mutual Homes is working on 47 homes, Plus Dan is working on 26. Other work is being undertaken by a social investor, and by the eco-based Terrace 21 housing co-op “I think it’s that mix which has worked, as there’s lots of different ideas going into the place,” Hughes adds.

Assemble themselves are a relatively recent arrival, for a group nominated for the art world’s most famous gong. “We started working together in 2010,” says Jones. “We came together as a group just to do one project, which became the Cinerolium.”

That was a glittering temporary cinema, created in a former petrol station in London’s Clerkenwell district. “We thought that would be a really great site to test ideas out on. So we brought together loads of friends to help build it and lots of other people to come and experience it. It was a really kind of fun process for us, just testing out ideas and building things ourselves. Lots of the ways of working we developed in that project have gradually been evolving over subsequent years.”

“A lot of us graduated in 2009,” Jones explains, “and were working for a year or so in different architecture practices. We wanted a way to be more hands on and test ideas out within the city, rather than being stuck behind a computer working on a small part of a very large project.” The point of the Cinerolium was to do something “on a small enough scale that we’d be able to have our hands in every different part of it. We’d have to find the funding, find the site, design it, build it, manage it, everything, and have a much more complete and holistic involvement.”

This was to be the first of several distinctive architectural projects around the UK, from a scrap playground at Baltic Street in Glasgow to a temporary arts venue in a motorway undercroft in Hackney. I ask Jones about themes he sees in the group’s work.

“We’re kind of really interested in the idea of resourcefulness and complexity and messiness in the city, as that what makes places interesting,” he says. “So the fact that there are places where there can be overlaps and intersections between historic building fabrics and something new and inserted and also between the different needs of different groups – that’s kind of a very exciting situation to be part of.”

This sort of ethos is visible when visiting the studio complex they occupy in Bow, east London, with several other creative practitioners. Sugarhouse Studios and the adjacent Yardhouse, with its striking polychromatic concrete tiles – designed and largely built by Assemble – are filled with well-used machine tools, packed storage racks and a busy, bustling office. It’s all a long way from the glass-coffee table minimalism of many architectural practices.

A sense of the practical and of innovative solutions pervades their work. But how does a collective of 18 people work in practice?

“Normally what happens is that if a project or invitation comes in to us,” Jones explains. “Then basically if two people in Assemble want to work on it and no one else has an issue with them working on it, then that’s enough for us to take on that project.”

Each project is managed by two people – “like a buddy system,” Jones says. There’s a group meeting every Monday morning, then a project review that evening. “That was just a way of us being able to take on more work, but also allow us a bit more independence in the way we do work, so that we’re not all trying to hold the same pen at the same time.”

Assemble are currently involved with a range of other projects, including designing a new art gallery for Goldsmiths College in a former Victorian bathhouse. They’re now going international, too. “We’re working on a project now in Berlin, with the House of World Cultures: they partnered four local Berlin based initiatives with four international architecture practices to each develop new models for housing.

“We’re working with this really amazing group called Stille Strasse who are a self-organised seniors group aged between their 70s and 90s who squatted and saved their local meeting house and they run it themselves. So we’ve been working with them to develop a model of self-determined living in housing in old age.”

Assemble and the Four Streets CLT will have to wait until December to find out if they have won the Turner Prize. In Granby however, the work goes on rebuilding regardless, bit by bit, day by day, not headline-grabbing, but with far more important long-lasting results. “The next thing in the big picture is the Four Corners project, which is the four corners of Granby Street and Cairns Street,” says Hughes. “There are three existing though derelict shop units there and one that sort of accidently fell in on itself. We’ve just completed a six-week community storytelling project that Writing on the Wall ran with us, to involve everybody in the wider Granby and Liverpool 8 in gathering together stories of Granby and out of them we want to start pulling together what people’s ideas are for the best things to do with the Four Corners.”

The Turner judges were keen to set the Granby project in an art historical context, linking back to the Pre-Raphaelites, the Arts and Crafts movement, the Bauhaus. So, is what’s going on in Granby a new movement in art and ideas?

“Yesterday there were community members coming into their [Assemble’s] workshop,” says Ronnie Hughes, “and doing that proper kind of co-working; while you’re focusing on getting the hardcore into the moulds and pouring concrete on them, people are having deep and meaningful conversations about re-making the place.” It appeals to him, he adds, “in a way that sitting around having endless blue-sky visions no longer does”.

“Let’s make something and see what we come up with while we’re making it. It’s revolutionary.”

This piece was published by CityMetric, a New Statesman website, in September 2015.