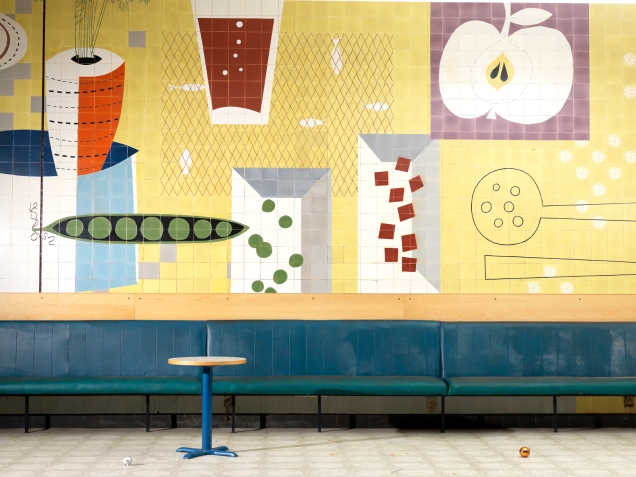 Standing prominently on the corner of Ranelagh Street and Renshaw Street in Liverpool, the huge former Lewis’s department store is currently enveloped in plastic sheeting. Soon it will re-emerge as part of the Central Village development, but for now, what was formerly Liverpool’s grandest shop, and its unique Modernist features, remains covered up.

The store, no connection to the John Lewis Partnership, was founded in Liverpool by David Lewis in 1856 and expanded to Manchester in 1877. Lewis was known as a philanthropist and, after his death in 1885, his will paid for the David Lewis Theatre and Hostel on the edge of Toxteth in Liverpool and in Manchester, a centre for people with Epilepsy, whose successor still bears his name.

After David Lewis’s heirs, the Cohen family, took over, Lewis’s expanded rapidly, opening stores across the country in first half of the twentieth century. The Liverpool store was rebuilt and expanded in 1923 to a design by Gerald De Courcey Fraser, becoming one of the biggest in the UK. However, Lewis’s forward march was to be halted by the Second World War. On 3rd May 1941, during Liverpool’s infamous May Blitz, the store was almost entirely destroyed, part of the aerial assault that would see Liverpool become the most bombed city outside of London.

Post war, Lewis’s was keen to regain its position as the grandest store in Liverpool. De Courcey Fraser designed the replacement for his previous building, beginning in 1947. The store apparently began to trade again prior to construction being completed – there are stories of shop staff clambering over rickety scaffolding between sections in pre ‘health and safety’ days.

Only the furthest part of the building down Renshaw Street, the ‘Watson Building’, which at one point housed a car showroom, was retained from the older, more decorative 1920s building. The remainder was completely rebuilt of steel framed construction, clad in largely flat and imposing Portland stone; the Lewis’s name carved into the side and picked out in gold.

To mark the reconstruction, Lewis’s commissioned sculptor Jacob Epstein to create a new artwork for the prominent corner section of the building between Renshaw and Ranelagh Streets.  A pioneer of Modernism in sculpture, Epstein had once been a controversial figure, causing scandal in 1931 by exhibiting a statue of a pregnant woman called ‘Genesis’ in Liverpool’s Bluecoat Arts Centre. The curious, some 50,000 of them in four weeks, paid sixpence each to see it. By the 1950s though, Epstein was something of an elder statesman in the arts.

However, this didn’t mean he had lost the power to shock. On 20th November 1956, the statue commissioned by Lewis’s to symbolise “the struggle and determination of Liverpool to rehabilitate itself after the grim, destructive blitz years”. (Evening Express, 1956) and entitled ‘The Spirit of Liverpool Resurgent’ was unveiled. It was a large naked man standing up on the prow of a ship. Apparently the sudden sight of the naked statue caused some people to faint and a war of words for and against its artistic merits and morality began in the newspapers. Locally meanwhile, the statue quickly gained the nickname ‘Dickie Lewis’.

However, ‘Liverpool Resurgent’ wasn’t the only Modernist feature of the new Lewis’s and the company’s desire to embody the post war optimism. The interior of the store was filled with cutting edge design features, none more so than in its catering facilities situated on the upper floors of the huge building.

Lewis’s Liverpool store was a complex in itself, with around 1,300 staff at its height. It contained its own bank, pet store, hair salon and travel agency alongside the usual department store fare, and the scale of its catering facilities reflected this. There were several eateries, each aimed at different ‘classes’ of shopper and each containing striking Modernist features, the likes of which must have been a rare sight to the war-battered austerity Liverpool of the 1950s.

Perhaps most notable was the self-service cafeteria. This contained large tiled murals designed by Carter’s of Poole, which later became the famous Poole Pottery. The murals featured bold and abstract designs of food, crockery, cutlery and kitchen utensils. Added to this were geometric light fittings with hints of the atoms and space themes that were so popular in the 1950s, and vibrant colours throughout. These designs apparently all inspired by the restaurant at the 1951 Festival of Britain, an event which is credited by many with ushering Britain into the Modern age.

However, the cafeteria was not alone. For the middle classes there was The Mersey Room waitress service restaurant. This contained etched wooden panelling depicting the history of Liverpool created by the influential Design Research Unit, the outfit behind such design classics as the British Rail logo and a key player in the Festival of Britain. The grandest eatery of all though, was the Red Rose Restaurant, which was silver service and aimed very much at the wealthiest of Lewis’s patrons. This featured a striking bronze sculpted screen depicting the Wars of the Roses created by Mitzi Cunliffe, perhaps best known for her design for the BAFTA Award statuette.

With the opening of these eateries, Lewis’s was at its peak, in an era before internet shopping, supermarkets and out-of-town retail parks. Generations of Liverpudlians have strong memories of its huge range and good service. Perhaps most of all, many people remember the grand Christmas grotto and meeting future wives and husbands under Epstein’s ‘statue exceedingly bare’.

For employees, there are memories of a benevolent employer that provided ‘a job for life’, where whole families would work together, and that even paid for its own sports fields on the edge of town. By the 1960s Lewis’s even owned London’s Selfridges and opened a Modernist tile-fronted store on the Blackpool waterfront in its continued expansion.

By the 1970s though, the company’s fortunes began to wane. For all their investment in cutting edge design in the 1950s, Lewis’s subsequently failed to adapt to changing markets. One by one its branch stores closed and the floorspace began to be reduced at its flagship Liverpool site. When the Red Rose Restaurant was closed in 1986, its bronze screen was acquired by Cunliffe and reinstalled at her home in Seillans, France. However, the remaining Modernist features in the building were sealed up and forgotten, the disused floors being used for storage.

In 2008 photographer Stephen King entered the lift of the slowly dying department store and was greeted by the attendant (yes, in Lewis’s they still had lift attendants). They sparked up a conversation and King was told about the abandoned upper floors still containing their original 1950s interiors. King made it his mission to explore and photograph them, his project culminating in a book and exhibition entitled ‘Lewis’s Fifth Floor: A Department Story’.

As fate would have it, the opening of the exhibition in 2010 coincided with the final closure of Lewis’s after 150 years and the show became a focal point for former staff and customers to reminisce about what had been the greatest store in Liverpool, if not the UK. Luckily, during one of Lewis’s pervious crises in 2007, the building had been Grade II listed, meaning its historic features were protected.

The Lewis’s building is now being incorporated by developers Merepark into a huge scheme called Central Village, opening in 2013. This will see the creation of shops, offices, hotels, eateries and a cinema, as well as a rebuilt Central Station. The overall façade of the building is being retained, including the Epstein statue, and, though internally it will be largely unrecognisable as the old Lewis’s, its remaining Modernist features will be restored. Most prominently, the former cafeteria with its tiled murals and geometric lights will become the Breakfast Bar of the Adagio hotel, while the panelling from The Mersey Room will be refitted to one of the hotel’s corridors.

It’s ironic perhaps that it was the decline of both Lewis’s and the Liverpool economy that saw these features preserved. Elsewhere, the building would have long been completely stripped for a new use before listing would have even been considered. Lewis’s is sorely missed, but at least elements of its proud history are being retained in a development that symbolises Liverpool, if not resurgent, then at least looking again to the future.

Thanks to everyone who worked on ‘Lewis’s Fifth Floor: A Department Story’, especially Stephen King for the use of his images, and Merepark for the information on the current development.

This is an extended version of a piece that appeared in The Modernist magazine in December 2012.